Last adaptation to the version: 3.0.4

The UMA is an audit-proof archiving system. All archived information should be kept unchanged and be easily and permanently available to users.

When considering a holistic backup strategy, this information must be considered so that it can be made available again in the event of a failure of the UMA and the subsequent reinstallation.

The backup strategy is extended by one of the following backup options of the UMA.


The menu of the UMA backup function is located under Maintenance / Backup.

Backup of the UMA configuration


Since the archive store of the UMA is encrypted and the backup files are also encrypted during creation, it is necessary to backup this key.
The container encryption information is located in the UMA configuration. Therefore it must be backed up first.

The Export button creates a file which can then be Download. A click on this button saves the UMA configuration as a file named "uma-config.db" in the folder designated for your downloads.

A backup copy should absolutely be kept in a further safe place.
Only in this way it is guaranteed that this is also available in case of emergency.
Additionally, the Encryption Key, which can also be found on the Backup tab, can also be backed up.
With it, a restore is also possible without configuration data.

First, in the section Backup Devices the device or devices to which the backups are to be saved are defined. The following types are distinguished: 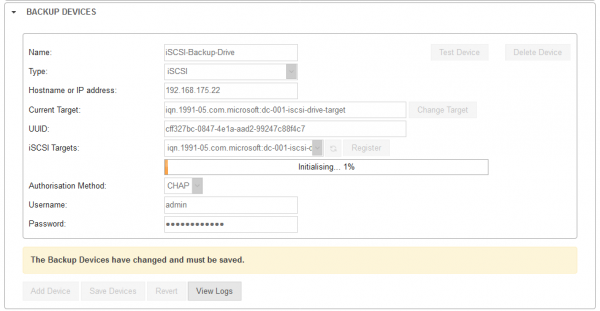 First, an iSCSI target must be set up on a NAS or server. Please follow the instructions for the corresponding storage devices or servers.

The following settings must be made in the UMA:

iSCSI (internet Small Computer System Interface) is a very efficient network data transfer method.
The storage devices on which the data are then to be stored are called "targets". Many server systems or NAS (Network Attached Storage) can be set up as iSCSI targets.

A Windows share is a shared drive or folder accessible over a network using the SMB (Server Message Block) protocol, usually on a Windows server or on a NAS.

It is important that the correct share name is entered.

Uses SMB signatures for the connection.
The same settings apply as for Windows Share
exception:

If an FTP server (File Transfer Protocol) is available, it can also be used for backing up the UMA archive.
When using FTP, the data will not be transferred encrypted.

Please note for which folders FTP has been shared with the user on the server.
.

The port used for this is 21

The complete path must be entered here in any case.

The port used for this is 22

A USB drive is always practical when a backup is to be created "just quickly". Both hard disks and flash memory such as USB sticks are supported here.

Always disconnect USB devices from the UMA before rebooting. An inserted USB device could be recognized by the BIOS as a boot drive and then block the restart of the UMA.

The following settings must be made in the UMA:

After saving the created backup device, the connection to this device must be tested. To do so, press the Test Device button, which will trigger a success message after a short time.

A backup job controls when, on which device and with which backup format a backup should be created. Furthermore, it is defined here how many backups are to be kept for the restore process.

First, the job is given a name and a device is selected on which the backups are to be stored. 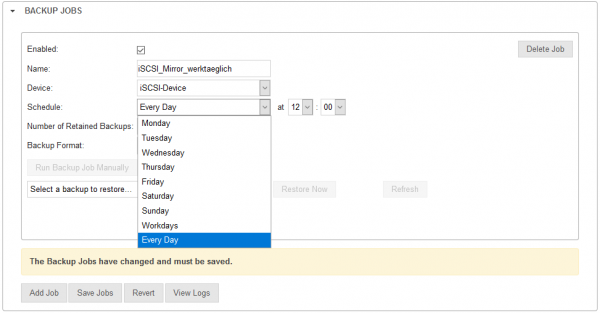 For scheduling, it is important to consider some of the features of the UMA.

If a backup is performed, a snapshot of the archive is created first.
Before creating this snapshot, some services on the UMA will be stopped.


These include, among others:

Please note the following when scheduling:
The days Monday to Sunday are available for scheduling. This means, for example, that once a week, on every Sunday, a backup will be performed on the specified device.
Furthermore, the backup can be performed every working day (Monday - Friday) or every day.
After the backup is completed, a confirmation email will be sent to the address specified under System Settings / System Users / System Administrator.

Besides the creation of a single backup, it is also possible to keep several of different days. You can choose between the last one (1) and the ten last ones (10).

It is also possible to keep all backups, but this is only useful when using the Time Machine backup format.
For the format Mirror there is always only one backup.

To be selected here:

If the first backup was created, it must be ensured that it can be restored. This can be done with the button Restore.
A specific backup can be selected depending on the number of backups held: Choose a backup to restore

To ensure that the backup can also be restored on newly installed hardware, a disaster recovery test is always included in a full backup.
For example, a UMA can be installed on a virtual machine. The previously backed up UMA configuration file is then imported on this virtual machine. Using the installation wizard or under System Settings / Archive Storage the mounted archive hard disk is initialized and then the backup is restored via Restore.

Once the backup is successful, it can be assumed that it works.

Since the backup jobs have different formats and/or different locations, the function is inserted with the individual jobs.
A backup must be selected beforehand: Select a backup to restore

The Update will update the list of backups and a click on Restore will start the restore.

Contained are in an archive backup

Retrieved from "https://wiki.securepoint.de/index.php?title=UMA/Backup&oldid=77832"
Category:
This page was last edited on 23 December 2020, at 14:56.
Privacy policy
About Securepoint Wiki
Disclaimers