Information about the license model of the UMA

Last adaptation to the version: 3.0.1

For the operation of a Securepoint UMA, a user license is always required.
There are two components to consider. On the one hand, a runtime in which it is valid. On the other hand, the number of mailboxes to be archived with the UMA.

Differences due to user registration

The private archives can be uniquely assigned to a user.
The assignment is made via the email address to a user account in AD. If a user has several email addresses, they are combined in one archive.

A public archive is assigned to an object (such as a distribution list) in AD.
The assignment is made using the email address to an object in AD. If an Active Directory is used in combination with an Exchange, an assignment is predefined by the system. A manual selection in the menu Accounts is recommended here.

Example:
A company has 10 employees, each with their own email address. An Exchange server is used as the email server. The UMA is connected to the AD. The email addresses info@ and sales@ also exist as distribution lists on the Exchange. The company therefore has a total of 12 actively used email addresses. Only 10 users need to be licensed on the UMA, since the two distribution lists are not covered by the license.

Example:
A company has 20 employees, each with their own email address. A Tobit server is used as the email server and the UMA works with a local user administration. Additionally, the email addresses info@, sales@, support@ exist as distribution lists on the Tobit. The company therefore has a total of 23 actively used email addresses. These email addresses are each assigned to a user on the UMA. A local user corresponds to an archive on the UMA. In this case, all 23 archives must be considered in the licensing. 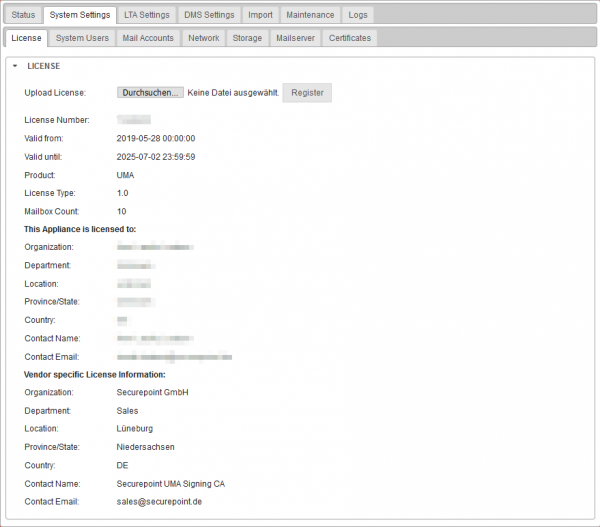 Under the tab System Settings / License the usage license is imported and displayed, which was previously downloaded as a file from the Securepoint Reseller Portal at my.securepoint.de.
With the Browse button the UMA license file can be selected and uploaded to the UMA and then activated with the Register button.

If the license is imported, all license data is listed here.

If the validity of the license is exceeded, the UMA will continue to operate, but it will not fetch any new emails from the mail server after the expiration date.
Previously archived emails and documents can, however, be viewed and downloaded and the evidence for these documents will remain intact.

During the initial start-up a license must be imported.
The required license file can be downloaded from the Reseller Portal in the section Licenses

Retrieved from "https://wiki.securepoint.de/index.php?title=UMA/UMA_Lizenz&oldid=74967"
Category:
This page was last edited on 6 July 2020, at 10:37.
Privacy policy
About Securepoint Wiki
Disclaimers