Conversion version from 2.5.24 to UMA NG

An upgrade from version 2.5.24 to UMA NG v3.x is not directly possible due to technical restructuring. Therefore, a conversion version was developed, with which the upgrade can be performed.

In previous versions up to UMA 2.5.24 the interfaces were bridged.
It was therefore irrelevant whether access was via eth0 or eth1. The eth1 interface is deactivated as of UMA v2.9.9

Access to the UMA as of v2.9.9 is exclusively possible via eth0

You should check which interface is used before the conversion. 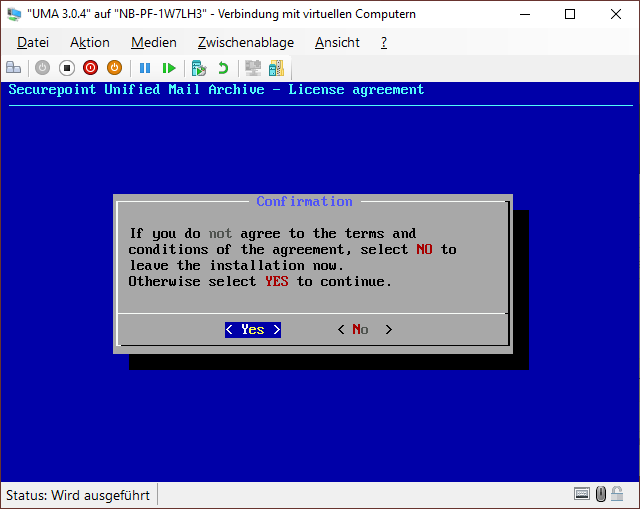 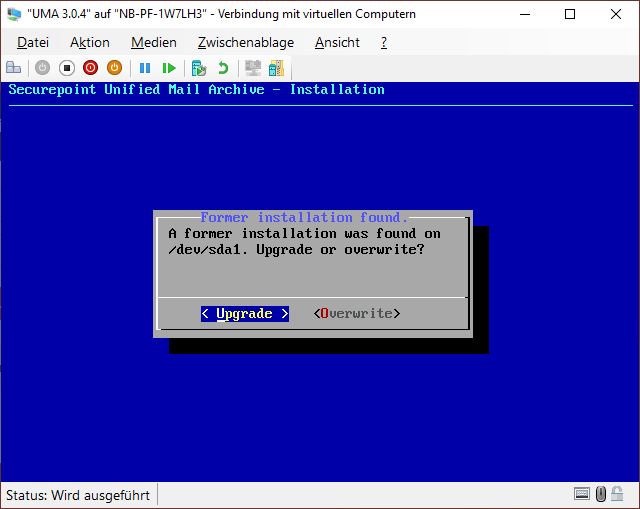 Confirm the message "A former installation was found..." with the option < Uupgrade >. 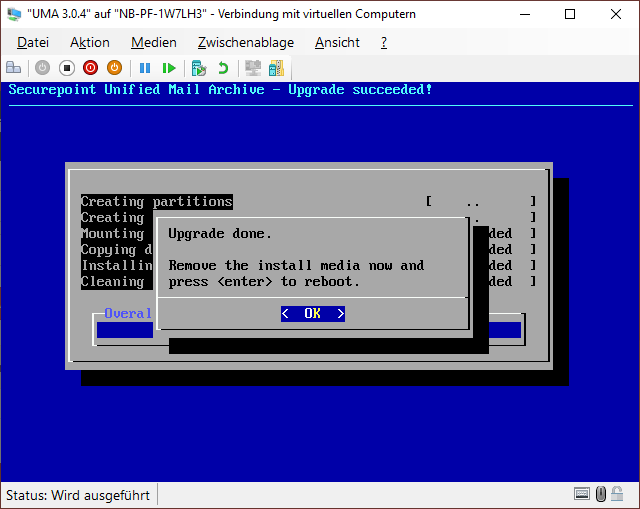 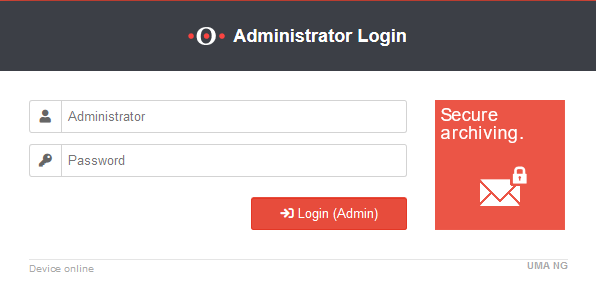 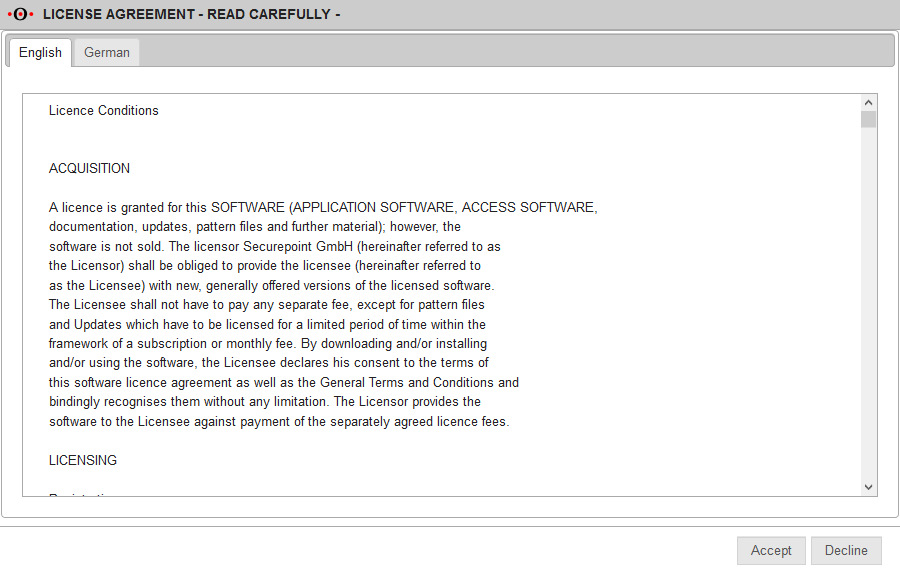 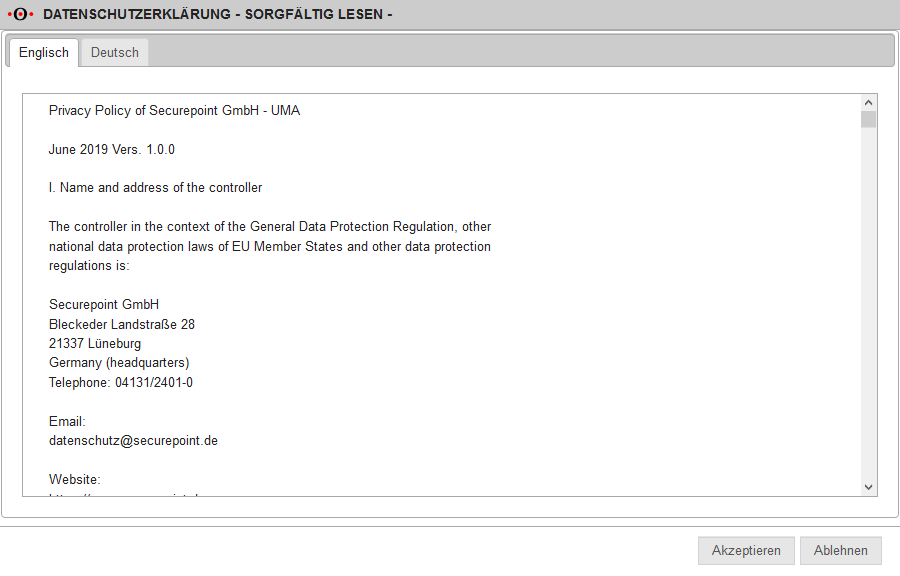 Message in the user interface during the upgrade

Preparing and starting the conversion 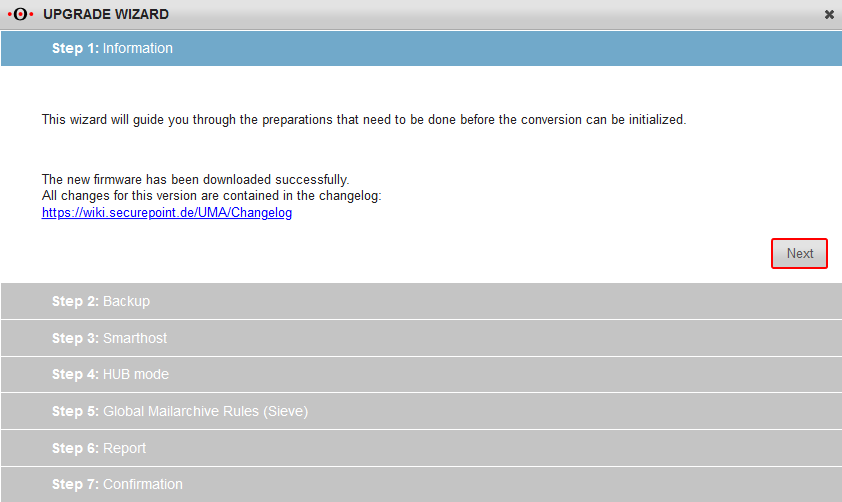 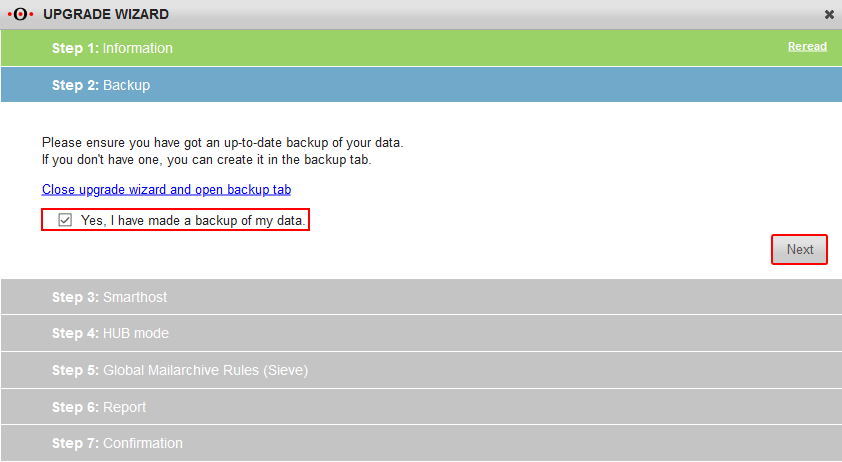 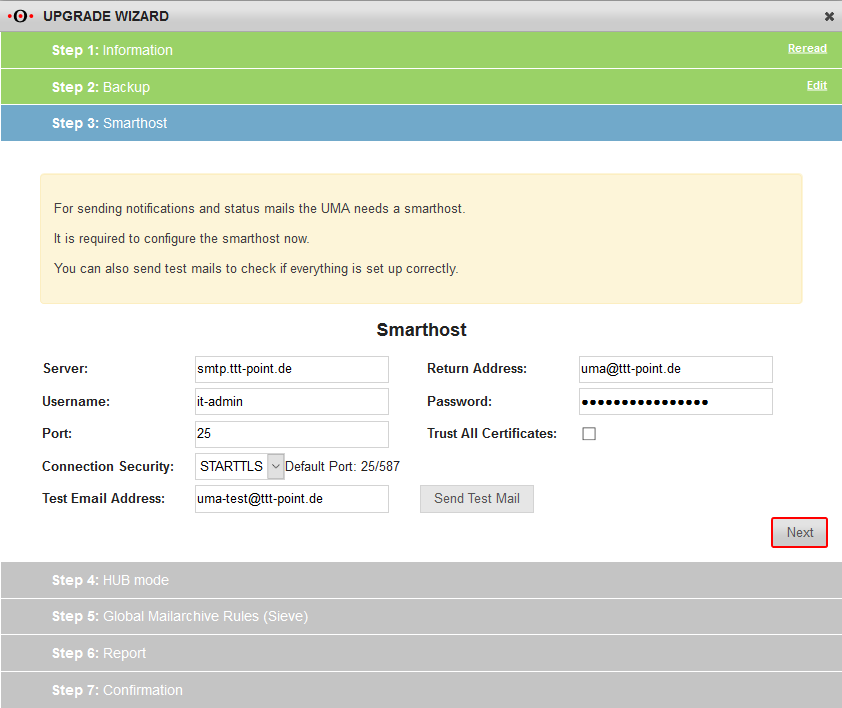 Smarthost for status messages during the conversion 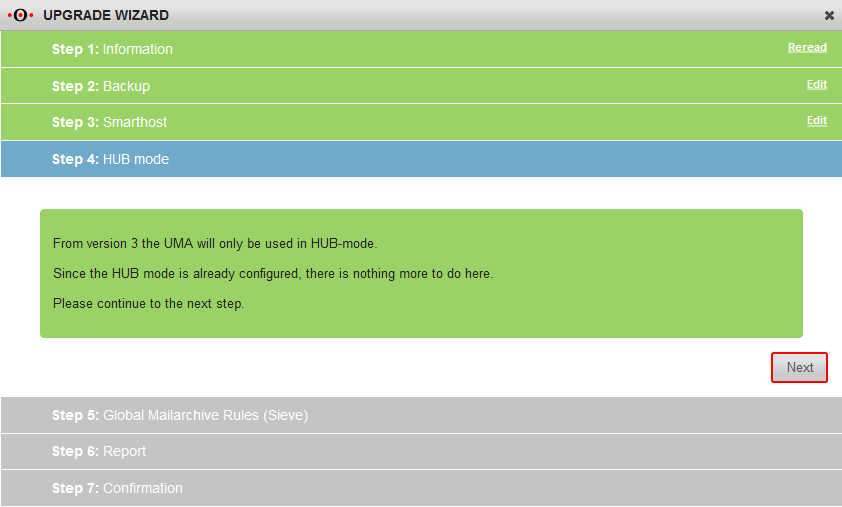 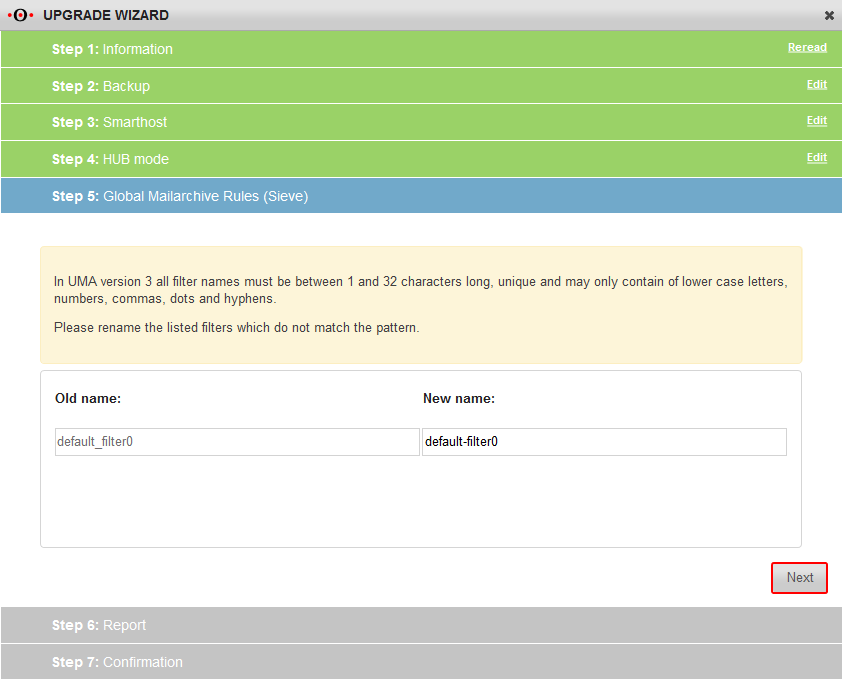 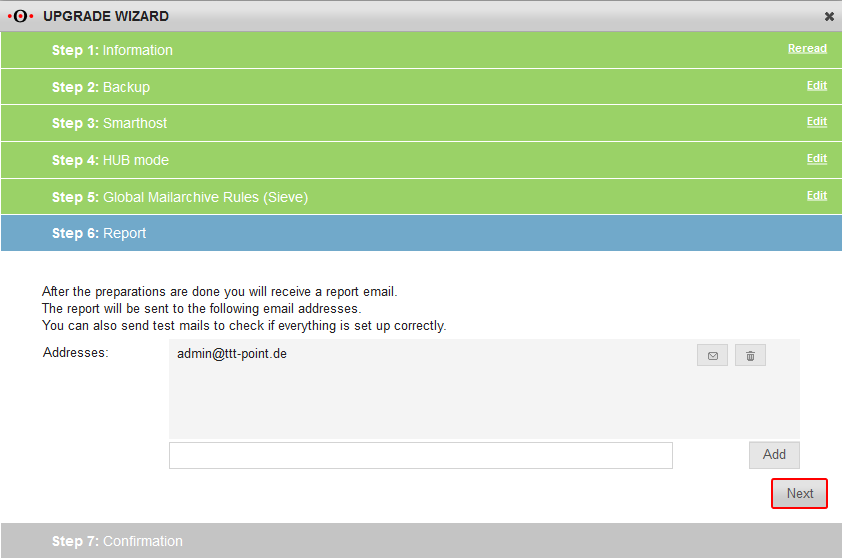 The conversion was successfully completed.

Point of no return! 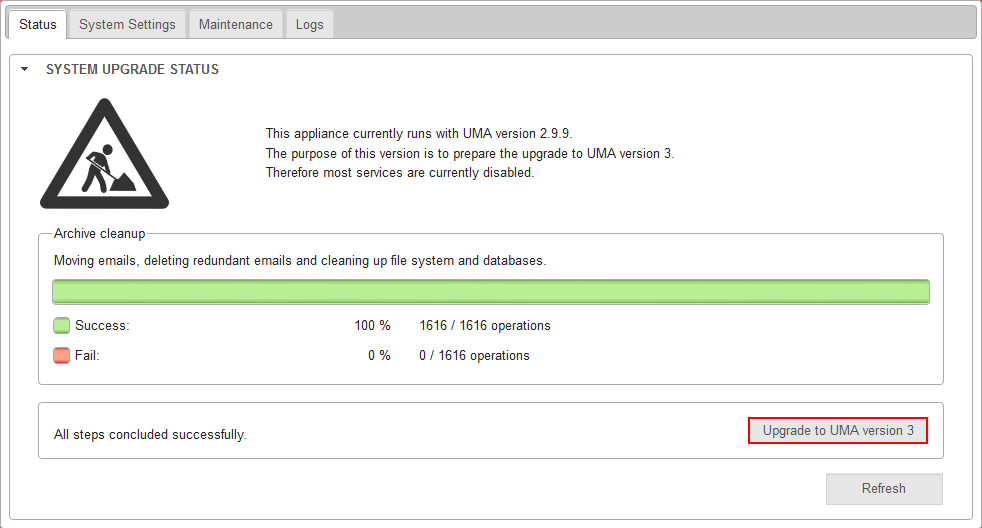 After successful conversion the upgrade to version 3 can be performed

A reboot is required

To commit the upgrade as a future boot version, you must press Finalize Update 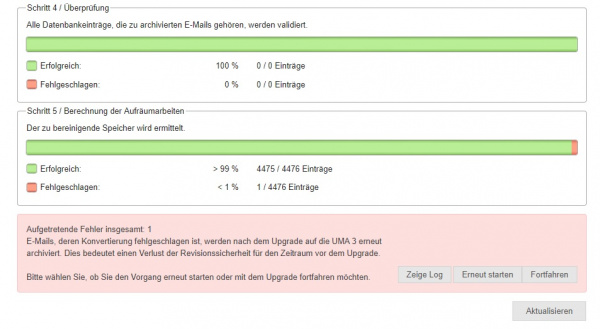 It is possible that errors occurred, but the conversion could still be completed.
A common reason is, for example, a missing SID in the header
This email never received an archiving SID and was therefore not archived correctly.
An archiving was now carried out provisionally without a timestamp in the LTA.
The conversion can be completed with the button Continue. 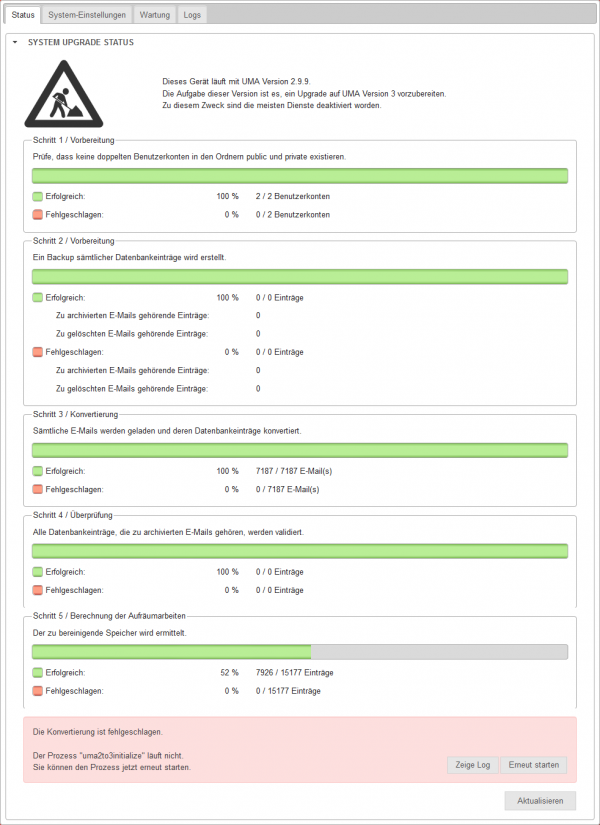 Termination of the conversion

In rare cases it can happen that the conversion terminates without result.
In this case our support should be contacted to find solutions.

If there is no possibility of conversion, it is possible to import a backup from UMA 2.5.x directly into UMA NG v3.
This process is much faster than the conversion, but the timestamp and therefore the evidence value is lost. The prescribed archiving according to GoBD is still guaranteed.
Retrieved from "https://wiki.securepoint.de/index.php?title=UMA/Update2.9.9&oldid=78180"
Categories:
This page was last edited on 20 January 2021, at 11:46.
Privacy policy
About Securepoint Wiki
Disclaimers