Connection of a UTM to an AD/LDAP

An AD or LDAP can be used for authentication on the UTM. The rights on the UTM can then be controlled via the group membership in the AD.

In general, this is the Active Directory Service, which manages the domain in a network and controls the authentication of the network users via the LDAP and Kerberos protocol.

To use an AD / LDAP for authentication, users must be created there and organized in groups. 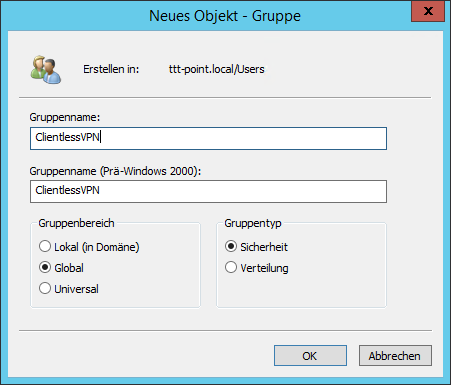 The authorizations for the services contained in the UTM can be managed in groups. The users to be assigned to these groups must first be assigned to corresponding user groups in AD.

In this example, the users for Clientless VPN are to be authenticated via the Active Directory Service.

So first of all a group of the type Security Group must be added on the AD, which is given the name ClientlessVPN here. 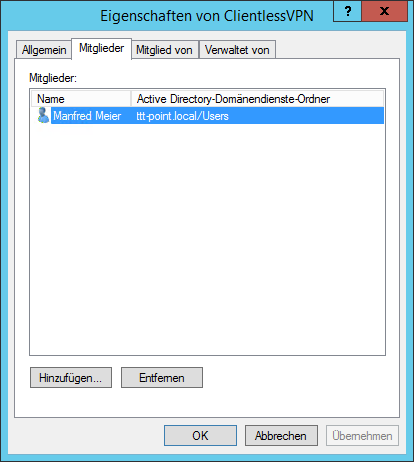 User is a member of the group

The users to be enabled for Clientless VPN are then added to this group.

Integrate UTM into the domain

It is important to make sure that the UTM Time is reasonably synchronized with the AD, since a Kerberos ticket has a limited validity period.

Otherwise the wizard can be started with the button Wizard 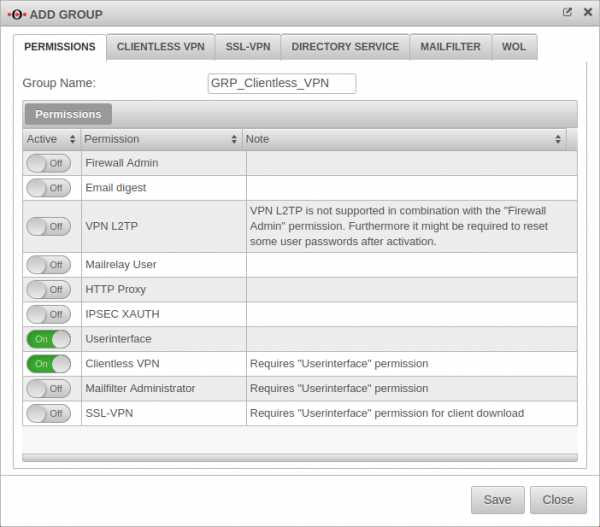 To grant users from the Active Directory the permissions for accessing the UTM user interface and using the Clientless VPN, a group with exactly these permissions is created in the → Authentication →UserTab Groups Button Add Group menu. 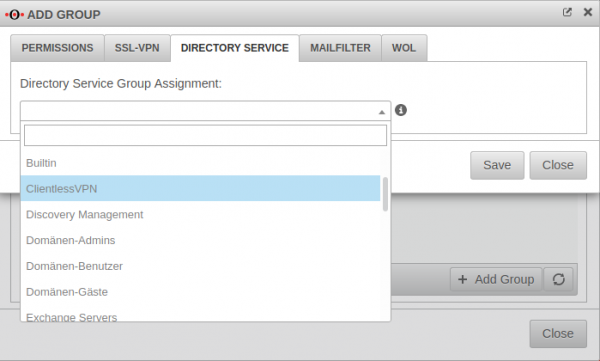 Select user group from AD
In the tab Directory Service the corresponding group from the Active Directory can now be selected and assigned.

After saving, every user who is a member of the AD group ClientlessVPN can log on to the UTM with their Windows domains access data for using the Clientless VPN.

Validating the AD connection with CLI

Joining and leaving the domain

To validate whether the UTM has already joined the domain:

If this is not the case, the following output will take place

The command to leave the domain is

When entering or leaving the Active Directory, the administrator password must be entered. The password is not stored, but the AD membership is nevertheless rebootable.

With the following command the groups can be listed in the Active Directory:

Verification of users and group membership

The following command checks whether an AD user is assigned to an UTM group:

If this is not the case, the output is

Command to display the group membership and permissions for an AD user:

In some scenarios, the domain controller is located behind a site-to-site VPN tunnel. If this is the case, a corresponding zone and rule must be configured.
DNS-Relay bei IPSec-S2S
DNS-Relay bei SSL-S2S
Attention: To join an active directory located behind a VPN tunnel, the LDAP ports are required in the NAT rule towards the domain controller in addition to the DNS ports.

Retrieved from "https://wiki.securepoint.de/index.php?title=UTM/AUTH/AD_Anbindung&oldid=74157"
Categories:
This page was last edited on 11 May 2020, at 07:45.
Privacy policy
About Securepoint Wiki
Disclaimers