The UTM is upgraded by converting it into a Hot-Standy UTM cluster and protects business-critical processes against the failure of a UTM. Securepoint provides an active/passive cluster for this purpose. The UTMs within the cluster monitor each other and automatically switch to the device with the best status if required. An intervention of the administrator is not necessary.

When setting up the UTM cluster, two UTMs with identical firmware are connected via a Hotwire interface. The installation with the "Cluster Setup Wizard" is performed on the original UTM, which will be the MASTER in the cluster then created. This UTM will be used to synchronize the configuration. On the spare UTM, which will be the BACKUP in the cluster, the Hotwire interface is defined and an SSH key is generated during installation. The SSH key of the MASTER is also entered on the spare UTM.
The active UTM in the cluster, has the higher priority and is called the MASTER.
The UTM with the lower priority, the passive UTM, is the BACKUP.

The following requirements are necessary for cluster operation:

Functionality of the cluster

Functionality of the cluster 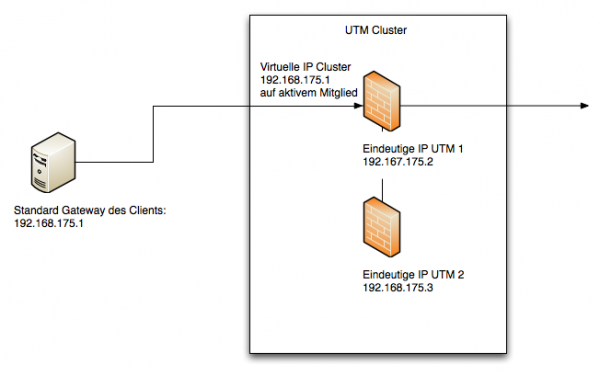 VRRP (Virtual Router Redundancy Protocol) is the communication protocol of the cluster. It is only active on interfaces that are configured as High-Availibility interfaces. The master of the UTM cluster sends data packets to the backup via this protocol. If the backup does not receive any data packets, it upgrades itself to the master.

No special firewall rules are required to enable communication with the VRR protocol.

The following states or events trigger a switchover within the cluster:

Fallback in a cluster 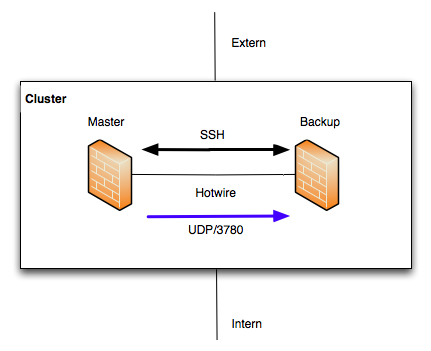 The Hotwire connection should always be a direct cable connection (no switch etc. in between). It must be ensured that nobody is administratively using the member of the cluster to which the synchronization is to be made at the time.

The following parts of the configuration are not adjusted:

It is not absolutely necessary to configure unique IP addresses on interfaces on which an HA interface with virtual IP addresses is operated. However, if the member of the UTM cluster is to be uniquely identified via this interface, this is necessary. In this case, the virtual IP address is used to access the UTM that is the master at that moment.

This example shows a configuration with which a UTM cluster can be operated on a DSL modem. The dial-up is done directly by the UTM.

Setting up the UTMs

To set up the UTM cluster, the installation wizard is used first. To prevent double dial-up, the DSL modem should not be connected. Up to this point, the configuration of the two UTMs differs only in the internal and external IP address. In the last step of the installation wizard, the cluster license is selected. After the wizard is completed, the UTMs are restarted.

The UTMs are now physically connected via the selected Hotwire interface. This must occupy the same port on the machines - for example LAN3/eth2.

The UTMs have different priorities within the cluster. The higher priority is given to the master, the lower to the backup system. In our example, the UTM with the unique internal IP address 192.168.100.2 will be the master. Login via the web interface with this IP and the port for administration (Default: 11115).

If the status is not updated immediately, this can again be triggered manually via the button for updating .

This example describes a configuration with an external router. The router is the gateway to the Internet. It is possible that a public network was given by the provider. A private network is used in this example. The procedure is then the same as for the public network. Two HA interfaces are now configured here. One for the internal and one for the external interface.

Setting up the UTMs

To start up the UTM cluster, the installation wizard is used first. This setup is performed separately on each UTM. Up to this point, the configuration of the two UTMs differs only in the internal and external IP address. In the last step of the installation wizard, the cluster license is selected. After the wizard is completed, the UTMs are restarted.

The UTMs are now physically connected via the selected Hotwire interface. This must occupy the same port on the machines - for example LAN3/eth2. 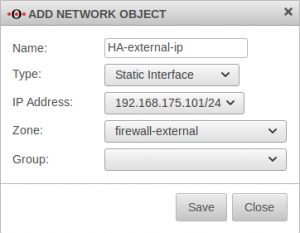 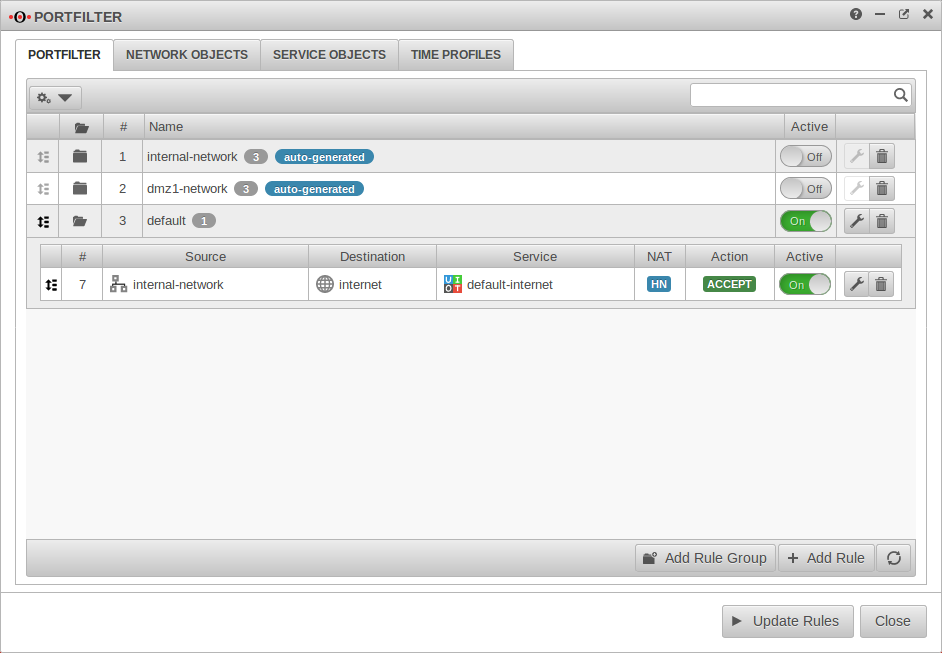 Afterwards the corresponding HideNAT rule is edited in the Port filter tab. In the example the rule number 7. 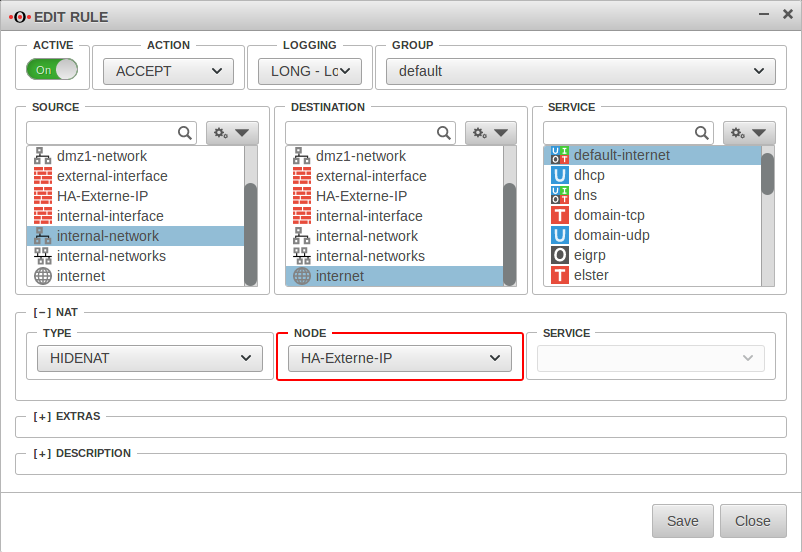 The object external-interface is replaced by the object HA-External-IP just created.


If the ping to the router ran without interruption, it is still stored in the Conntrack, so the ping is still being NATed via the wrong IP address.
The ping must be interrupted. After 30 seconds at the earliest the ping can be restarted.

For NAT settings, unique IP addresses must always be used in the network objects when configuring NAT via an HA interface. This applies not only to HideNATs but also to port forwarding or destination NATs.

Applications in the cluster configuration

Applications use IP addresses to identify themselves to other servers.
For some applications, it is possible to set the cluster IP for this.

This is shown here as an example for the mailrelay.

Emails are to be sent and received via the mailrelay of the UTMs.
For this purpose, corresponding PTR, A, MX records and SPF entries were made in the TXT records of the domain, which point to the external virtual IP address of the cluster. Of course, these IP addresses must be routed by the router that forwards the Internet access to your own network.
In order for the mail relay to send emails via this virtual IP, the outgoing IP address must be set correctly in the application. In our case the virtual IP 192.168.175.101

The mail relay now always communicates with the virtual IP address 192.168.175.101. The internal mail server is also contacted with this IP as sender. This has to be taken into account when configuring the mail server if it only accepts SMTP connections from certain IPs.

Communication of applications running on the firewall

All applications that establish a connection from the firewall itself use the primary IPs of the interfaces for this purpose (unless otherwise configured). If management IPs from the same broadcast domain are used, these primary IPs are not the virtual IP addresses.

If a parent proxy is in use, which accepts connections only from a certain IP, it must be configured in the menu → Applications →HTTP-ProxyTab General → Outgoing address can be specified.

If a parent proxy is in use, which accepts connections only from a certain IP, it must be configured in the menu → Applications →HTTP-ProxyTab General → Outgoing address can be specified.

If the server only allows connections from certain IPs, the management IPs of both devices must be released on the target server.

All IPSec connections must be adjusted in phase 1 so that one of the virtual IPs is permanently entered in the "Local Gateway" field.
→ VPN →IPSec → Phase 1 → General Local Gateway 192.168.175.101

In all SSL VPN server instances the option Multihome must be activated:
→ VPN →SSL-VPN Button Tab Advanced Multihome On

Communication with applications running on other devices

All SSLVPN client instances must be customized to use one of the virtual IPs to connect. The following CLI commands are required for this:

The POP3 proxy always communicates 'with the management IP, if this is in the same broadcast domain as the default gateway. This should be noted when restricting access to POP3 servers to certain IP addresses in their configuration.

Connections to DNS servers are always established with the management IPs. This must be taken into account when restricting access to DNS servers to certain IP addresses in their configuration.

The following describes commands for the Securepoint CLI.

DHCP server in a cluster environment

When using the UTM as DHCP server, these IP addresses must not be located in the same Broadcast Domain of the other IP addresses.
Otherwise the DHCP server would key itself to the physical address of the spare UTM during the fallback and would not synchronize the leases. See: Cluster Configuration Step 2

Retrieved from "https://wiki.securepoint.de/index.php?title=UTM/NET/Cluster&oldid=80215"
Category:
This page was last edited on 9 July 2021, at 15:39.
Privacy policy
About Securepoint Wiki
Disclaimers