Additional to the multipath routing the Securepoint appliance will adopt the "Load Balancing" whereby the load will distributed to the different internet connections.

For certain applications (Mailserver, VPN, ...) it's possible to use the same internet connection any time. In this case you have to assign an unambiguously route to the client. This function is called "Source Routing". The route is dependent to the application.

If you don't need an elaborate instruduction, you can use this checklist to set up your multipath routing. This checklist can also be used at troubleshooting.

The binding of the firewall to two internet connections can be done in different ways.

In this howto, two of the possible methods will be presented. Both scenarios assume, that the internet connection is an ADSL connection. It's possible to use ISDN or VDSL or a mix of these.

In scenario 1, both DSL connections will be connected with the firewall directly over a modem.

two DSL connections are directly connected to the firewall

One of the two DSL connections will be connected via a router.

For this configuration the appliance has to be connected directly to the DSL-Modems, so that the internet connections are directly managed by the firewall.

The interface wizard will be shown.

If you are using a PPTP interface you have to set more settings.

If you are using two PPTP connections, following settings will be possible.

If you are using two PPTP connections, following settings will be possible. To establish seperated rules for both DSL connections, you have to add another network object for the internet and one network object for the secound external interface. Inasmuch as zones can be assigned only one time, you have to use zones, that are not used (e.g. DMZ1). Another possibility is to add a new zone.

Click on the tab "Network Objects". In the list you can find all network objects, which are either created by default or added by an administrator.

Now you have to add another network object for the secound interface. For the first interface, an network object is already created by default. Set the zone to an other than "firewall-external", because it's already used by the first external interface (e.g. firewall-dmz1). Another possibility is to add a new zone.

In order to setup the hide-NAT, you need to create rules. You can only change this settings, if there is a network object for the internal network. Normally this network object is created by default. 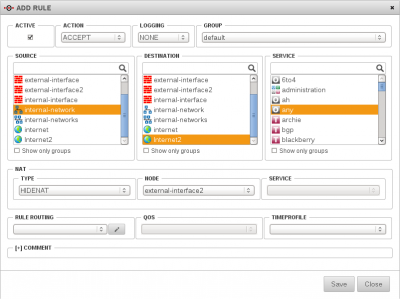 You have to set default routes for both connections. 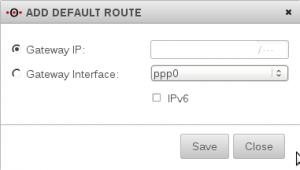 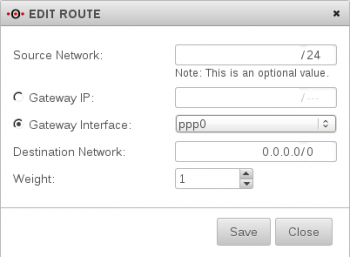 In priciple the configuration is the same like you are using two direclty connected DSL connetions. In contrast to this setup you only have to add one PPPoE interface with one DSL provider.

In this construction you have to set default routes too.